The club takes part in the Westward League Cross Country series.  One race per month is held from October to March using courses throughout Devon & Cornwall.  All age categories are catered for – starting with an under 11 development race (combined boys and girls) of approximately 1 mile going right through to senior & vet men’s race ( usually around 150 finishers ) and senior and vet women’s race (with well over a hundred finishers per race).  The men’s race is usually around 5 miles and the women’s race around 3.5 miles.  Courses are va 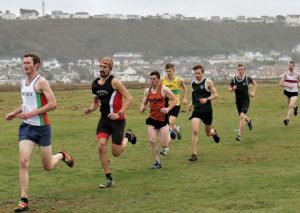 ried and can be tough, often including woodland, hills and fields.

Tavistock has an excellent record in the league over the years winning not only the team    competition on occasion but also providing many of the age category medalists.

There is an entry fee for entering the Westward League races of £1 per senior and 50p for juniors.

For juniors there are a number of schools cross country races, local, county and national levels and the club supports its athletes training towards these races.

You can find out more about the Westward League (fixtures, results etc.) here

Dart Group 7 Training We currently meet Tuesdays only at 5.30 at the Council Offices. Please … END_OF_DOCUMENT_TOKEN_TO_BE_REPLACED